In perfect weather and before a crowd of 100 people, the fortieth anniversary of the first trans-world radio contact was celebrated at the Shag Valley Station on Sunday, the 18th of October. (1924) 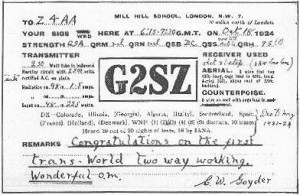 This was the culmination of weeks of work by the Otago Branch who must have been justly proud of the result of their endeavours.

Amateur operators from Wellington to Invercargill witnessed the ceremony which was held at the gates of the Bell’s station, about 17 miles from Palmerston South. The large contingent of members who travelled from Christchurch (including Tom Clarkson, ZL2AZ of Wellington) met local and Invercargill visitors at the Dunback Domain for a picnic lunch before travelling to the site.

The ceremony which started at 2 p.m was opened by Fourth District Vice-President David Lloyd, ZL4PG, who welcomed visitors on behalf of the Association and the host Branch, Otago.

Messages and greetings were read by him from the following:

Mr Cecil W. Goyder, ex 2SZ (who now lives in New York). In his letter, Goyder sent greetings to the Bells, NZART and the Radio Society of Great Britain. Unfortunately he was unable to come on air later to take part in the commemoration transmission made to England.

From Mr T. K. S. Sidey, ZL4AZ who sent greetings from himself and from the City of Dunedin.

From Ralph Slade, ZL2BK of Wellington, who was unable to attend because of illness, as was Mr H. N. Shrimpton, ZL2AUM of Wellington.

A telegram was received from Mr T. C. Middlemiss, ZL4BN of Dunedin, a message of congratulations from Mr R. T. Woodfield, ZL2VN of Palmerston North, and letters from Mr L. S. Spackman, ZL1AC of Auckland and Mrs Blackwood, wife of the late Mr Blackwood who assisted Frank Bell to erect the famous tower at the homestead.

A cablegram, “tie me aerial down, sport, good luck for today” came from Frank’s son in Queensland.  It was signed “Cleopatra….” in reference to the shape of the support for the plaque.

From Newington, Connecticut, came the cable “Hearty congratulations on historic anniversary and best wishes for many more years of Amateur Radio” and was signed the American Radio Relay League.

The first speaker was Alan Frame, ZL4GA of Invercargill, who spoke in his capacity as Grand Old Man of the Old Timers’ Club.

In his speech, Alan referred to the great pioneering work done by the early operators of this country.     In referring to the problems of the early men he said, “There was a shortage of radio components in those early days.     Even the more simple components had to be fashioned by hand.     They were tried and often found not to work, but experimenters learned to try again…..”

Alan then referred to the great contribution made to radio by Frank Bell and praised the spirit and determination shown by him from the start.

His excellent speech was received warmly by the crowd.

Deputising for the Director General, Mr Griffin apologised for the absence of Mr Darnell who was unable to be present owing to a prior engagement and conveyed his greetings and congratulations to the Bells.

Mr Griffin paid a fine tribute to Mr Bell and his pioneering work forty years ago and passed best wishes from the Post Office on this most historic occasion.

Earlier, Mr Griffin had startled the gathering with the statement that he had been told by ZL4PG that he was only to say two words!

The President of NZART, Mr Clive Liddell, ZL3ND, of Christchurch, was introduced.

In tracing the history of Amateur radio and Amateur achievement from the earliest days when everything was experimental and often far from practical, Mr Liddell referred to the great contributions Frank Bell had made to the science in New Zealand and the impact of this knowledge throughout the world.

In describing the event to the assembled guests, the President pointed out that not only was this the first Amateur radio contact around the world but it was in fact the first radio transmission of any kind to be sent and received at such a distance. “This Amateur achievement showed the whole world the practical use of shortwave communication, It was, indeed, a most significant contribution.” 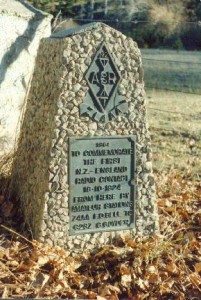 Commemorative Cairn circa.1984 photo by ZL4PZ

Mr Liddell then unveilled the plaque which had been draped with the flags of Great Britain and New Zealand.

“It is with the greatest of pleasure, then, that I unveil this plaque,” he said, to the applause of the crowd.

Cameras clicked and movies whirred as the striking monument to the historic occasion was revealed.

In his reply, Mr Frank Bell, who was visibly moved by the occasion, thanked the Amateurs of New Zealand and those who were responsible for the commemoration.

“My sister and I are deeply moved by this touching tribute to us,” he said.  “We are delighted and in fact a little amazed that you have remembered it at all.”

Speaking of the early days he said, “It was a lot of fun and we had a lot of help from others who were as keen as us.     Jack Orbell, Miles Barnett, Bill Crockett, Lalor Shiel and Ralph Slade made up the team with us and we had a wonderful time.     I expect I was lucky; Ralph (Slade) and Lalor (Shiel) worked into England the next night.”

In his typically unassuming and gentle manner he added, “You know, without them I don’t think we would have made it.”

“I would also like to thank all those who sent messages and greetings to us,” he continued. “It was wonderful to receive telegrams and letters from Cecil Goyder, Ralph Slade and all those other fine people who remembered us. It certainly brings back memories of those old days, and we appreciate it very much.”

Immediately after Frank’s reply, Alan Frame asked if he would become Patron of the Old Timers’ Club.     When Frank replied that this would be a great honour, he was presented with the Certificate of Membership to loud applause.

“In doing research into the background of this occasion,” he said, “I have been greatly assisted by the Bells.     I am not in the habit of quoting from ladies’ private diaries but I would like to quote the first five words at the top of Miss Bell’s diary of October 18th, 1824.     It says: “My birthday; champagne dinner tonight’.”

At this, Mr H. G. Hedge, presented bottles of champagne to both Frank and Brenda on behalf of the Otago Branch.

An invitation was then extended from the Bells to visit the homestead and the shack before afternoon tea. 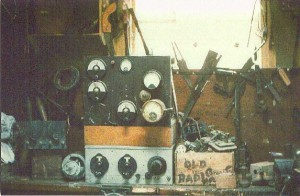 Equipment, including the original Meissiner transmitter built by Frank Bell, French “R” valves, 202’s, 203’s, ex-World War I. generators used for power supplies, and an extremely old and once quite operative tape recorder, were displayed.

The old timers present were amazed at the gear shown and many nostalgic memories were revived.

Literally hundreds of photographs were taken and groups of “Hams” talked excitedly of the days of home-made condensers, raw AC and “all that space 200 metres and down.”

Many people took the opportunity to look about the grounds of the Bell home, watching the three and four pound trout swimming in the pool and admiring the beautifully-kept gardens.  Afternoon tea was then served by the Bells.

To further commemorate the occasion, a commemoration transmission to England had been arranged for 6.30-the time of the original QSO.     ZL4FD’s National NCX3 SSB transceiver had been installed in the reading room and, earlier in the day, an 80 metre folded dipole had been slung 70 feet high between two trees, and the feeders and ZL4LV’s antenna tuner installed.

The contact station in England was G8PO in Hillend, near Portsmouth.

ZL4PG had arranged through the Radio Society of Great Britain that other British stations could possibly come on the air at the time.

David worked G8PO with loud and clear signals with the same gear on the previous night, but conditions on the Sunday night really let everyone down.

G8PO could be heard at times but VE’s, YV’s and other DX stations almost completely blotted out Ted’s transmissions.

Then Frank, ZL4LM, with his vertical antenna at Invercargill, assisted and later relayed signals from England. After shifting to almost 3.8 mcs a relatively clear channel was found and the contact commenced, using the Otago Branch callsign, ZL4JY.

The response from England was staggering! Firstly GB3BI called with greetings from the Boy Scouts of Great Britain. He was followed by G3BA with messages from the VHF operators of the Midlands.

Then followed DJ4WN, Alfred from Heidelberg who passed the congratulations of the Amateurs of Germany and G5BJ followed with a personal message. G5BJ had become interested in radio in 1916 and had worked the Bells in the very early days.

Frank and Brenda were astounded by the interest shown in Great Britain and passed their most sincere thanks to the operators in England and Germany via ZL4LM. Frank, at the microphone, also thanked G8PO and ZL4LM for their part in making the contact possible.  The QSO concluded at 1945 hours when the British signals were starting to fade.

Sincere thanks must also be passed to the Press and the New Zealand Broadcasting Corporation for the most generous publicity given to this occasion.

This was played over 4ZB Dunedin at 9.40 that evening and the next night played Nationally.  Reference was also made in three National news bulletins during the night.

An excellent television film was made of the ceremony by producer Michael Minehan and cameraman Ken Lloyd.     This was first shown on the early news telecast at 7.30 p.m. and a further item shown on the late news programme.  It was seen on Channels 1, 2, 4, 5, and 6 in the Otago-Southland area that night and Nationally the next night.  Arrangements were made, I understand, to send this material overseas.

The Press of Dunedin and the Press Association also assisted us.  Four stories were run in Dunedin, including a half-page feature article entitled “Otago ‘Ham’ made history.

Without doubt, the ceremony could not have taken place without the excellent work of the Otago Branch.

The monument, designed and pre-cast by Jeff Walker, ZL4DH, was a magnificent piece of work.

The four-sided monument was cast in concrete with pink stone chip decoration.  Seated on a concrete base, it stands over two feet high.  On the face at the top is a replica of the NZART badge with Frank Bell’s call, ZL4AA, inscribed.

The bronze plates were also cast by Jeff.

A group of the Dunedin Amateurs took it to the site on the Saturday and completed it there.

George Hedge, ZL4FD most generously assisted with the radio and electrical equipment used at all times and other members cheerfully assisted in every way to make the occasion the success it doubtless was.