This article was written around 1992 by Don Watson ZL4TGR. Photographs by Alan ZL4PZ – April 1992

The linear repeater is sadly no longer working. 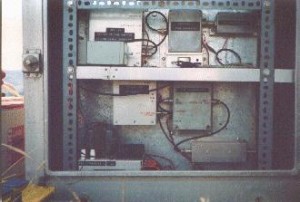 The Dunedin 435 linear transponder is now in its 10th year since it was introduced by Bob Sutton ZL4DO and Mike Pinfold ZL1BTB in Break-In November 1982.

This article described the concept, early construction and testing and some crystal ball gazing looking towards the future of the ‘infant’ Dunedin transponder.

This is a brief description of the progress and events during the succeeding ten years in the life of Bob and Mike’s ‘baby’.

At about the time that the system was first weaned in late 1982 (Mike gained his degree and departed our University town and Bob also joined the exodus North) the system was first operated from various Dunedin suburban locations where it grew out of its ‘Hudsons biscuit tin’.

Stages were re-built as modules in aluminium boxes, Yagis refurbished and a weatherproof housing completed.

In the dead of winter 1984 it was turned out of its cosy childhood home to fend for itself amongst the elements on a very exposed hillside site at Highcliff on the Otago Peninsula, having gained its license a few weeks earlier on the 30th May.

The power supply link was re-positioned and from this time its diet was changed from mains energy to battery juice.  This was supplied in the form of regular battery changes – weather permitting – carried up from the road below. 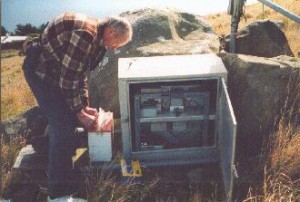 The next technical advance (?) was the fitting up and connecting of a wind generator.  The first effect was modulation of the transponded signal by the generator blades.  The second was to litter the hillside with scrap aluminium and stainless steel at the next brisk southerly winter blow.

An analysis of the crash debris allowed a set of replacement blades to be made, more suited to the environment than the commercial blades which were originally designed for electric fence duty.

There was considerable interest, many experiments and some improvements carried out from mid 1984 to early 1985 and eventually most of the little tricks which a linear transponder can perform were demonstrated.

Contacts were made in USB, LSB, AM, CW and FM modes. The ability to transpond two or more QSOs simultaneously was also demonstrated.

Some practise was also had netting to the signals of the other stations as though operating through a satellite with a doppler shift.  A slightly off-frequency crystal has never been replaced.

Nearly continuous reliable operation was maintained for the next four years. 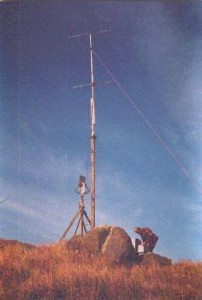 Mast for the linear – the blades of the generator are visible

In 1988 some modules were changed with improvement in quality but the full nominal output of 12.5w PEP could not be achieved.  A penalty was an increase in the standing current drain.  The limited output of the wind generator means that batteries now require regular changing and re-charging.

A storm in late 1988 required a re-build of both antenna and support pole with some time off air.

From January 1989 there have been few entries in the Log, other than battery events noted.

Operation has been without failure, other than from loss of power when weather prevents battery change, but Dunedin 435 has become lonely and little heard.

Perhaps its rather shy well behaved ways have helped it to be rather forgotten.    (It only transponds what it hears; it has no tail and it now only makes very subdued white noise over its allocated band.)