Well, ZL4AA, Shag Valley Station is well and truly on the air.

A large team of volunteers from Dunedin,  inland Otago, South Otago and ZL2CC from the North Island all converged on the site on Saturday to complete the installation.  A number of us were delayed so arrived after lunch to find the amazing sight of Johnny Bell’s Shag Valley Station  shearing muster paddock chocker full of vehicles.

The tri-bander had all been checked, ropes shot into the nearby trees to hang a 40m Quad, and 30m Dipole, and the aerials  were all in the process of being raised by the teams.

Another team led by Kay ZL4KAY was getting stuck into the cleaning, with husband Harold leading a small team cleaning up the museum. 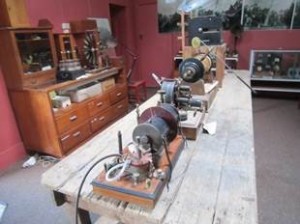 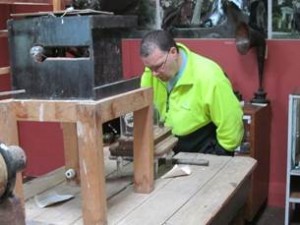 James studying some of the old equipment 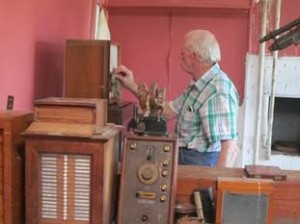 Ross ZL4RC  was getting stuck into the kitchen. 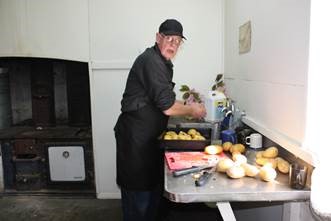 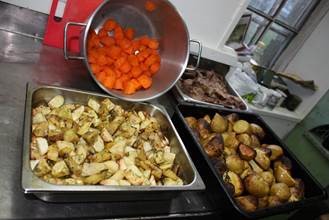 Another team was reinforcing and checking the guys on the lattice tower before the major task of getting the tri-bander up in one piece. 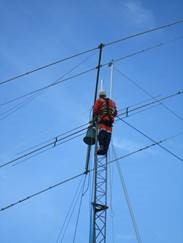 ZL4 JH up the mast Steady – almost there! 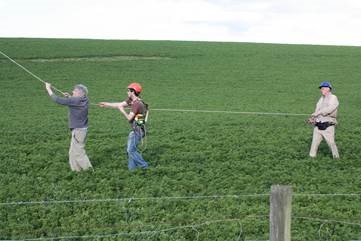 Mike ZL4OL,  Adam ZL4 ASC and Hugh ZL4HL – steady goes as they pull the tri-bander up the mast.

Other were installing the VHF and UHF equipment on the hill behind the paddock as well as the HF and VHF shacks in the historic shearing quarters where everything is based.

Up the mast, the rotator refused to tune, just clicked and juddered so another team set to upgrading the long control lines and once it was turning, the Tri-bander was carefully hoisted and clamped to the rotator. 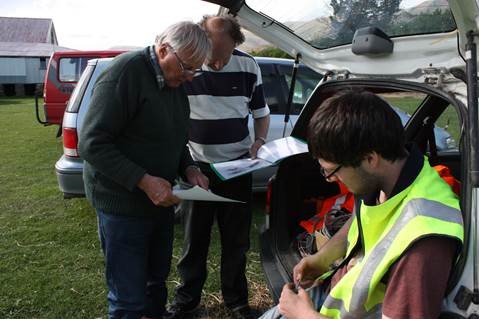 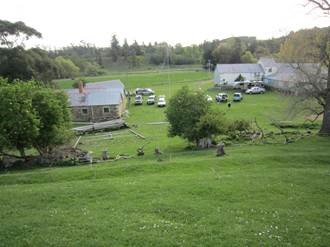 Historic shearers quarters to the left, shearing sheds to the right, block sniffing department (noses)!, 17m beam in the middle, and yes it is well clear of the overhead power lines, an Electrical Engineer positioned it!, and the assembled tri-bander on the ground in front.

Want some more definition on the photos, hold the CTRL key down on rotate the roller on your mouse.

By early afternoon, the team was active on 40 and 80 metres.  And two hours later, one of the HF rigs cried enough and refused to transmit.  Adam ZL4ASC and Ron ZL4 RMF came to the rescue with rigs from their vehicles so we now have set up two operating HF stations with aerials for:-

And being out in the country, it is nice and electrically quiet!!

And once all the aerials were up, the coaxs out and connected, and all things operating, hunger took over! 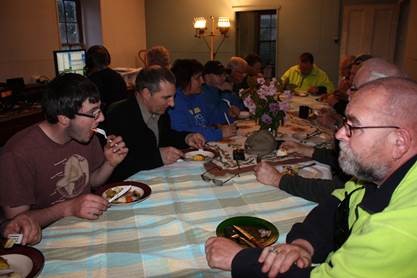 Where to find them – this information from ZL2CC, Mike on site

CW will be where there is space ‘down the bottom’.

Over the weekend the team have been moving around the band a bit  a bit to dodge the contests and so on that were on air.

Kiwis can also find the team on the national System, just call ZL4AA, Shag Valley Station, or for overseas stations, you can try the IRLP.  Node 6507 is connected to Dunedin 690 VHF repeater which is accessed from Shag Valley Station. 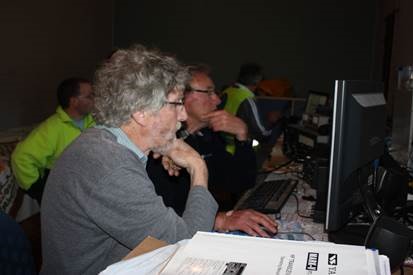 Will it all go – Mike ZL4OL in front, Ken ZL4NR behind and James observing from the rear.

Yep, it is certainly all going and Ken Zl4NR has just reported that 2SZ has been worked on two bands.

And the next week or so:-

A small operating team will be on station right through until next Sunday morning.  Wednesday night, the Branch 30 club meet will be on site instead of at the Branch headquarters.  Just turn up for a coffee and bickie and to see it all happening.  Most of those attending are going straight through from work to make sure they are there for the more interesting evening operating time – remember, the Greyline period is around 7-30pm plus or minus around half an hour.

Then from Friday night the team will  start gathering for the main event on the anniversary, Saturday 18th at around 7-30pm local time, 0630 UTC .   Branch 30 will be supplying afternoon tea and supper and Chrissie from Land SAR will be masterminding  an evening BBQ meal for everyone.

And on Sunday, we start pulling it all apart again and returning all the equipment to its owners.